Interview with Anri – a South African expat who lived in Ecuador

In 2019, Anri Lategan, a South African, moved to Ecuador where she volunteered on a small dairy farm. This was not her first expat experience living abroad and she moved there alone after spending some time in Colombia. She talks about the quality of life, safety and getting visas, and compares the cost of living to South Africa. Read her memorable experience of using Quito's public transport as well as other aspects of her life in the city.

For more on expat life in this South American country, read our Moving to Ecuador guide. 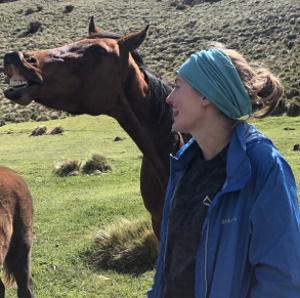 Q: Where are you originally from?
A: Cape Town, South Africa

Q: Where were you living?
A: Quito, Ecuador

Q: Why did you move; what do you do?
A: Ecuador was my second ‘stop’ after three months in Colombia. I volunteered on a small dairy farm about 18.6 miles (30km) outside the city on the Via Papallacta for the better part of three months. In between, I explored Quito and a few smaller towns in the surrounding regions.

Q: What do you enjoy most about Quito? How would you rate the quality of life compared to South Africa?
A: Quito is, in many ways, similar to Cape Town. It has a bit of both worlds: there are some very modern, developed areas and others that are more rural and have a wildly different feel. Unemployment and poverty are visible on the streets, as it is in Cape Town. Now, even more so with Venezuelans fleeing the situation in their own country. In general, people in Ecuador are more spiritual and less materialistic than Capetonians, in my opinion. There also seems to be less intercultural tension and less violence, which ultimately means a better quality of life.

Q: Any negative experiences?
A: None that I can recall.

Q: What are the biggest adjustments you had to make when settling into expat life here? Did you experience any particular elements of culture shock?
A: Recycling is a foreign concept for most people there. That and the lack of a recycling system were extremely challenging as they use plastic for everything and aren’t open to considering alternatives.

Q: What’s the cost of living in Quito compared to South Africa? Is there anything particularly expensive or particularly cheap in Ecuador?
A: It’s similar to South Africa, although buying fresh foods from chains such as Supermaxi (comparable to Checkers or PicknPay in South Africa) is more expensive. I loved being able to go to the nearest market, interacting with the vendors and picking my own fruit and veg (which of course works out much cheaper as well).

Q: How would you rate the public transport in Quito? What is your most memorable experience of using Quito’s transport system?
A: The buses look different according to the area they serve. They all depart from either one of the two big bus terminals in the city. Marshalls at these terminals are usually quite helpful. Buses are rarely on time, although they run frequently during the day making it easy enough to catch a bus whenever you want. It’s inexpensive and fairly easy to use, with the name of the final destination usually indicated in the windscreen. The driver always has an ‘assistant’ who comes by to collect the fare and who you can tell where you want to get off. It’s your job to listen out for that name being shouted out by the driver.

My most memorable experience of this system has to be of the day I landed in Ecuador. My flight was delayed for hours and so I only arrived after dark. I wasn’t willing to pay an Uber to take me all the way to the city and opted for the first bus going in that direction. It turned out that this bus was not going straight to the city… After getting on and off five or six buses, with the assistance of the kindest strangers, I made my way to the first hostel I could find in the historic centre of Quito. Neither the bus drivers nor their assistants were particularly helpful on this evening.

Q: How would you rate the healthcare in Quito? Have you had any particularly good/bad experiences with regards to doctors and hospitals? Are there any hospitals you would recommend?
A: No first-hand experience with the healthcare system. I was in contact with people (locals) who were part of the public healthcare system who told me that there’s always a long waiting time involved when making a doctor’s appointment. There are many pharmacies and I had no problem getting pain medication over the counter.

Q: What are the biggest safety issues facing expats living in Quito or Ecuador? Are there any areas expats should avoid?
A: I felt safe in most places. As anywhere, it’s best to avoid the quiet corners. The city is very quiet after dark and I didn’t go out much after dark. I met other travellers whose luggage got stolen on buses but never heard of any violent confrontations.

Q: Was meeting people and making friends easy? How did you go about meeting new people?
A: I met other tourists in hostels and worked with other volunteers on the dairy farm. I also used Couchsurfing a couple of times and stayed with locals. Besides that, I didn’t meet many locals of my age. If I was planning on staying there long term, I would’ve made more of an effort to meet locals.

Q: Was getting a work permit or visa for Ecuador a relatively easy process? Did you tackle the visa process yourself, or did you enlist the services of an immigration consultant?
A: I entered with a tourist visa which is given on arrival for three months. I looked into getting a special visa for an internship which seemed to be a complex process. Acquiring a work visa is easier if you have a contract and all the other required documents as listed on the government web portal. I went to the Cancillería (Chancellor’s office) in Quitumbe to find out everything I couldn’t find on the internet. It’s worth making the trip to the south of Quito – Quitumbe – to confirm everything in person. There seems to be different requirements once you get there. Most work-related visas cost a few thousand South African rand (ZAR).

Q: Is there any advice you would like to offer new expat arrivals to Quito or Ecuador?
A: Make an effort to learn Spanish, it’ll help you a lot. Go to markets and talk to the vendors, take time to interact with locals on the street. People are keen to share their knowledge and there is so much to learn about the indigenous cultures and history.

Go see the small towns outside of the cities and explore the natural scenes – there are so many and they’re all super cheap if not free to access! You don’t need a car: buses will get you to most places. Also, forget about ever trusting a weather forecast while you live in Ecuador – there can be four seasons in a day, depending on where you are and the forecast is never accurate.