Interview with Meredith – an American expat in Nigeria

Meredith Salinas is an American expat who lived in Lagos with her husband and two children for three years. Although now back in the States, Meredith looks back on her expat life in Nigeria with fondness and shares some of her insights about life in this West African country. You can also read more about her family’s adventures on her blog, wefoundhappiness.blogspot.com 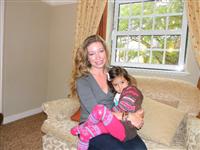 A: It is hard to say where I am originally from but I’ll try my best. I was born in Idaho and moved with my parents to California, Washington State, Michigan and then to Illinois. I grew up most of my life in Illinois. I did live my entire childhood and young adulthood in the US.

A:  My family and I are currently living just outside of Houston, Texas

Q: When did you move here?

A:  We moved back to the Houston area in August 2012 after a three-year assignment in Lagos, Nigeria.

A:  Yes, I moved with my husband and two children.

Q: Why did you move to Nigeria; what do you do?

A:  We moved to Lagos for my husband’s job in the oil industry.

Q: What did you enjoy most about Lagos, how’s the quality of life?

A:  When we lived in Lagos, I really enjoyed the expat community. In that community, everyone is in the same boat (so to speak) because they are not from that country. It is easy to have a sense of family away from home. I loved seeing all the different ways of life there from the people selling fruit in their carts from the side of the road to the “over the top” wealthy local Nigerians. It was one of the most wonderful, heartbreaking experiences of my life. The quality of life for an expat is wonderful, if you have the money to afford it. Decent housing is very expensive as is groceries. Public transport is overcrowded and very dangerous. Having a car and driver is almost a necessity.

Q: Any negatives? What did you miss most about home?

A:  While living in Lagos, we always had to be very vigilant about our surroundings. Although most people are very friendly, there are many very poor desperate people and robbery and muggings are common. It was also heartbreaking for me to see the very poor people begging for food and money on the side of the road many times with no clothes. I realized how blessed I am that I have what I have.

Q: Is Lagos safe? Are there any areas expats should avoid in Lagos?

A: Lagos is still a developing city and although some infrastructure is set up, it is not the same as a developed city. Expats need to be very vigilant of their surroundings especially at night. Victoria Island and Ikoyi are considered the safer parts of Lagos but there are still robberies and muggings which occur regularly. Just use common sense and don’t go places alone or out late at night.

Q: How would you rate the public transport in Lagos? What are the different options? Do you need to own a car?

I would definitely recommend owning a car and hiring a driver if you are planning to live in Lagos. The driving there is very dangerous and it helps to have a local at the wheel who knows which areas to avoid and which areas to go to, especially because the traffic can be horrendous in Lagos. The public transport in Lagos is mostly small very overcrowded vans which are called buses there. They have recently outlawed okadas (small motorcycles) which many locals used as an affordable form of transport. This is causing the already overcrowded buses to become even more crowded.

Q: How would you rate the healthcare in Nigeria?

A:  The healthcare is very poor in my own opinion. Mild colds and minor allergies can be treated. If you have a chronic health condition, you should definitely think twice before deciding to live there. Anything very serious can be treated in London or Cape Town, but both of these cities are a six-hour plane ride away. We were very fortunate that we did not have any severe medical issues in our family while we lived there.

About living in Lagos

Q: Which are the best places/suburbs to live in Lagos as an expat?

A:  The best places to live as an expat would be on Ikoyi or Victoria Island (VI).

Q: How do you rate the standard of housing in Lagos?

A: The standard of housing in the city was very different than what I was used to. Since Lagos is right along the equator, the weather is very damp and humid which is a prime place for mould to grow. Even in the nicest accommodations which can be found, there will be mould. Also, the power is very unreliable and the power will go out several times during the day. Most buildings rely on generator power.

There is a lot of dust which blows in from the Sahara Desert during the harmattan season. Mopping and sweeping will be a daily routine. For our family, we realized that the housing there was not what we were used to in terms of building quality and maintenance, but we made the best of it and realized we were not in our home country. We looked at it as an adventure.

Q: What’s the cost of living in Lagos compared to home? What is cheap or expensive in particular?

A:  It seems like everything there was more expensive because almost everything is imported to Nigeria. So groceries are very much more expensive than what I was used to in the US. However, pineapple, mangos and papayas (paw paws as the locals call them) are very reasonable. Housing is also very expensive, but some expats have companies which pay for housing for employees.

Q: What are the locals like; do you mix mainly with other expats in Lagos?

A: We mainly mixed with other expats in our small expat community but I became very good friends with our stewardess and learned a lot of the Nigerian culture from her. I met her family and made friends with many of her friends as well. I found all of the Nigerian people I met to have some of the most beautiful smiles I had ever seen and they are all very warm and welcoming to expats.

Q: Was it easy meeting people and making friends in Nigeria?

A:  In the expat community, we were all “in the same boat” and it was very easy to meet new people. New friends quickly turned into extended family. I made many wonderful friends there who my family will keep in contact with for years to come.

About working in Nigeria

Q: What’s the economic climate like in Lagos, is there plenty of work?

Q: How does the work culture in Nigeria differ from home?

A:  While there, I noticed that being on time was not a high priority in the workplace of locals which was something my family struggled with a bit.

A:  Yes, a relocation company assisted us with our move.

A: My husband seemed to adjust pretty easily because he had travelled back and forth several times to Lagos for work prior to our move. It was hard for me to adjust to things not always working and the power being out and living on a compound. It was a bit of culture shock to me when I first arrived there. But, it was also amazing in just a few short months how used to life I did become.

A: Our children were 15 months and three years old when we moved there and they settled in very easily. My son loved his school and my daughter bonded with our stewardess right away. I really think Lagos is a great place to go with young children because there is help readily available and when the children are little they only really care if mom and dad are there anyway. Once those needs are met, they are ready to go. It is harder for the parents to adjust.

Q: What are the schools in Lagos like, any particular suggestions?

A:  The only school I really have any knowledge of is the American International School of Lagos. My son went there for pre-K and kindergarten and his teachers were wonderful. They followed the American system and he had a seamless transition when we moved back and he started in first grade in August. I would highly recommend that school.

Q: Is there any other advice you would like to offer new expat arrivals to Nigeria?

A:  If you choose to go to Lagos, think of it as an adventure. If you enter into this journey full of doubt, you will miss all of the amazing opportunities there. You will have the opportunity to help people and have your eyes opened to an entire world you never knew existed. I was able to help with charities and Nigerian children’s education, and if I would have been scared and worried, I would never have taken those opportunities. The time my family and I had in Lagos was a heartbreaking, exhilarating, exciting ride I will never forget. Our family will remember our time there and the incredible people we met for the rest of our lives.